A couple weeks ago we went to see the kids at camp on visiting day. They have so much fun, learn new skills, and grow as individuals at camp – despite being away from the watchful eyes of their parental units. Go figure – let your kids spread their wings, and they do. One of the new skills both XX2 and the Boy tried out was waterskiing. So during visiting day they get to show off for the folks.

So we walk down to the lake, and have a few minutes before the kids get into the water. I sit down in a nice white gazebo next to the lake. Up flies a butterfly to perch on the rail right next to me. It’s basically just staring at me. No fear. No need to go anywhere else. Just hanging out. I bust out my camera and take a few pictures. The butterfly doesn’t move. My dad comes over and takes a few pictures – butterfly still doesn’t move. I don’t think much of it, and then we go see the kids ski. XX2 even gives us a wave as she motors on by. The Boy does get up on the skis. For about 4-5 seconds. Guess he can work on that some more next summer. 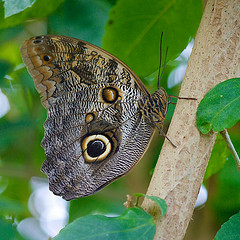 Then I was at Black Hat last week, and it was crazy how much the conference has changed over the past 5 years. The hallway booths are now an exhibit hall. The audience is much larger, and now a bunch of senior security folks show up as well. It reflects the crazy growth of the security business. Though it seems many hands-on practitioners still attend, which is the key to maintaining the show’s value.

During my meetings at Black Hat I was constantly talking about the change that is coming to security. We have been thinking a lot about what the future of security looks like, and we have some ideas. We will be right on some things, and wrong on others. But things will change. That much I can guarantee.

On Monday we put the kids back on the bus for another year of school. Lots of change happening at school as well. The twins are now broken up into 4 groups this year, with different teachers to specialize by subject. And there is a new principal in the elementary school, so no telling what else will change.

Then I can reflect on my own physical and mental evolution over the past few years. Lots of change there too. You seeing a theme here? The only constant is change.

Then the butterfly from visiting day flew back into my consciousness. Butterflies represent change. Starting life as a caterpillar, molting, and then emerging as a butterfly: a perfect representation of everything. Constantly changing and growing into something new.

You cannot stop change. Just like you cannot force a caterpillar to remain a caterpillar. You can resist but that will not end well. Change always wins. So embrace it. Lean into it. Don’t fear it. Treat every change as an opportunity to grow. Because that’s what it is…

The fine folks at the RSA Conference posted the talk Jennifer Minella and I did on mindfulness at the conference this year. You can check it out on YouTube. Take an hour and check it out. Your emails, alerts and Twitter timeline will be there when you get back.

Have you checked out our new video podcast? Rich, Adrian, and Mike get into a Google Hangout and.. hang out. We talk a bit about security as well. We try to keep these to 15 minutes or less, and usually fail.

We are back at work on a variety of blog series, so here is a list of the research currently underway. Remember you can get our Heavy Feed via RSS, with our content in all its unabridged glory. And you can get all our research papers too.

The Security Pro’s Guide to Cloud File Storage and Collaboration

« Previous Entry
Suing Gartner: a Pyrrhic Loss?
Next Entry »
It’s not a problem until someone dies…