Last week I mentioned how excited I was for the NFL season to be starting. I took the Boy to the Falcons’ home opener and it was awesome. It was a great game, and coming away with a victory in overtime was icing on the cake. As predicted, my voice was a bit rough on Monday from screaming all day Sunday, but it was worth it. I don’t think my son will ever forget that game, and neither will I.

Of course, I was expecting Monday to be all about the big victories. Who would have expected Buffalo to beat the Bears at home? Not me – I picked Chicago in my knockout pool, and was promptly knocked out. I’m like Glass Joe I get knocked out so early and often. At least that game happened during the Falcons game, so I wasn’t bothered to be setting $20 on fire. Again. And the Dolphins beating the Pats? Another surprise. 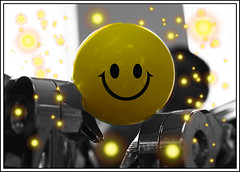 But the Monday news cycle was hijacked and dominated by the Ray Rice video. I will not link to it because it’s disgusting. The Ravens cut ties with the guy and now he’s suspended by the NFL. All of which is deserved. Can he rehabilitate himself? Maybe. Can he and his (now) wife work it out? Maybe. Was this an isolated incident, totally shocking and surprising to the people who claim to know him? No one knows that.

All we know is that at that moment in time, Ray Rice was a wife-beater. And he’ll suffer the consequences of that action for the rest of his days. But let’s take a more constructive view of the situation. How did he get so angry as to strike the person he claims to love the most? What could he have done differently to avoid finding himself in that situation or role? I don’t have any experience with domestic violence. I don’t let the Boy hit his sisters, no matter what they do. But I do know a thing or two about anger. Anger (and my inability to manage it) was my catalyst to start moving down the mindfulness path, as I described in my RSA talk with JJ (link below).

I am not going to preach the benefits of a daily hour of meditation. I won’t push anything except a little tactic I have learned, to both help me be aware of my increasing frustration, and to stop the process before it turns to anger and then rage. When I feel my fight or flight instincts kicking in, I smile and then take a deep breath. That brings my awareness out of the current stressful situation and lets me take a step back before I do something stupid. It allows me to sit with my frustration and not allow it to become anger. If it sounds easy, that’s because it is. It takes discipline to not take the bait, but it’s easy to do.

Of course this is not the right approach if you are being chased by a lion or an angry mob. At that point your fight or flight instincts are right on the money. But as long as your life is in no danger, a smile and then a deep breath work. At least they do for me.

You will get strange looks when you break into a smile during a tense situation. Folks may think you are crazy, and may get more fired up that you aren’t taking them seriously. I don’t worry about what other people think – I figure they prefer a smile to a felonious assault. We all need tactics to handle the stress in our lives. Figure out what works for you, and make it a point to practice. The unfortunate truth is that if you do security you will have plenty of opportunities for practice.

The fine folks at the RSA Conference posted the talk Jennifer Minella and I did on mindfulness at the conference this year. You can check it out on YouTube. Take an hour and check it out. Your emails, alerts and Twitter timeline will be there when you get back.

Have you checked out our new video podcast? Rich, Adrian, and Mike get into a Google Hangout and.. hang out. We talk a bit about security as well. We try to keep these to 15 minutes or less, and usually fail.

We are back at work on a variety of blog series, so here is a list of the research currently underway. Remember you can get our Heavy Feed via RSS, with our content in all its unabridged glory. And you can get all our research papers too.

The Security Pro’s Guide to Cloud File Storage and Collaboration