Do you ever play those wacky question games with your friends? You know, where the questions try to embarrass you and make you say silly things? I was never much of a game player, but sometimes it’s fun. At some point in every game, a question about your favorite physical feature comes up. A lot of people say their eyes. Or their legs. Or maybe some other (less obvious) feature. It would also be interesting to ask your significant other or friends what they thought. I shudder to think about that. But if you ask me, the answer is pretty easy.

It’s my hair. Yeah, that sounds a bit vain, but I do like my hair. Even though it turned gray when I was in my early 30s, that was never an impediment. It probably helped early in my career, as it made me seem a bit older and more experienced, even though I had no idea what I was doing (I still don’t). The only issue that ever materialized was when I first started dating Mira (who also has great hair). She showed my picture to her daughter (who was 12 at the time), and she asked, “why are you dating that old guy?” That still cracks me up. 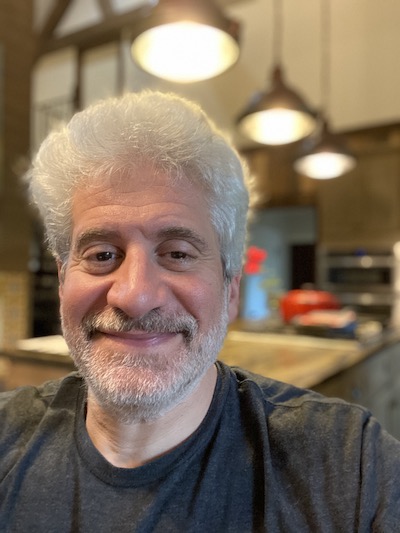 This COVID thing has created a big challenge for me. I usually wear my hair pretty short, trimmed with a clipper on the sides, and styled up top. But for a couple of months, seeing my stylist wasn’t an option. So my hair has grown. And grown. And grown. As it gets longer, it elevates. It’s like a bird’s nest elevation. You know, like losing your keys in there elevation. I could probably fit a Smart Car in there if I don’t get it cut at some point soon.

If I’m going to grow my hair out, I want to have Michael Douglas’s hair. His hair is incredible, especially during his Black Rain period. The way his hair flowed as he was riding the motorcycle through Tokyo in that movie. It was awesome, but that is not to be. My destiny is to have big bird nest hair.

Mira told me to shave it off. I have a bunch of friends that have done the home haircut, and it seems to work OK. I learned that a friend of mine has been doing his hair at home for years. And he looks impeccable even during the pandemic. I’m a bit jealous.

I even bought a hair clipper to do it myself. I figured I’d let one of the kids have fun with it, and it would make for a fun activity. What else are we doing? The clipper is still in its packaging. I can’t bring myself to use it. Even if the self-cut turned out to be a total fiasco, my hair grows so fast it would only take a few weeks to grow out. So we aren’t talking about common sense here. There is something deeper in play, which took me a little while to figure out.

I used to wear my hair very short in college during my meathead stage. So it’s not that I’m scared of really short hair. Then I remembered the one time I did a buzz cut as an adult. It was the mid-90s when I was 60 lbs heavier and into denim shirts. Yes, denim shirts were cool back then, trust me. So combine a big dude with a buzz cut in a denim shirt, and then one of my friends told me I looked like Grossberger from Stir Crazy, that was that. No more buzz cut. Clearly, I’m still scarred from that.

I guess I have a bit of a Samson complex. It’s like I’ll lose my powers if I get a terrible haircut. I’m not sure what powers I have, but I’m not going to risk it. I’ll just let the nest keep growing. Mira says she likes it, especially when I gel my hair into submission and comb it straight back. I call it the poofy Gekko look. But I fear the gel strategy won’t last for much longer. By the end of the day, the top is still under control, but my sides start to go a little wacky, probably from me running my hands through my hair throughout the day. I kind of look like Doc Brown from Back to the Future around 6 PM. It’s pretty scary.

What to do? It turns out hair salons were one of the first businesses to reopen in Georgia. So I made an appointment for mid-June to get a cut from my regular stylist. Is it a risk? Yes. And I’ve never checked her license, but I’m pretty sure her name isn’t Deliah. The salon is taking precautions. I’ll be wearing a mask and so will she. We have to wait outside, and she cleans and disinfects everything between customers.

It’s a risk that I’m willing to take. Because at some point, we have to return to some sense of normalcy. And for me, getting my hair cut without risking a Grossberger is the kind of normalcy I need.